What are Tithe Maps 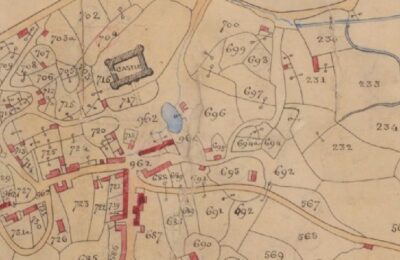 In 1830 a skeleton was found buried in a barn close to the village of Oddingley in Worcestershire. This discovery would not only have a major effect on the lives of many rural people across Britain, it also prompted an improvement in the quality of British cartography (map making).

The skeletal remains were those of Richard Heming who had disappeared 24 years before. Heming had, the day before he was himself murdered in 1806, shot and killed the Rev. George Parker who, as the local priest, was responsible for collecting the Tithe from his parishioners.

Tithes were taxes, paid directly to the church or private landlord and were equal to one-tenth of the goods produced by anyone working the land, whether they were tenants or landholders; they could be collected either in goods or a negotiated amount of cash.

Tithes were a source of deep resentment throughout rural Britain and the village of Oddingley was no exception. Most of the farmers in the village had agreed to pay the yearly Tithe in cash which gave the Rev. Parker an annual income of £135 (a large amount at the time). Over the years, due to inflation cutting into his standard of living, the Rev. Parker had tried, unsuccessfully, to negotiate a higher amount. As the farmers refused to pay more money he decided to collect the Tithe in goods – the value of which was higher than the cash amount the farmers had been paying. Eventually after years of negotiations the locals did agree to an increase, only for the Rev. Parker to then demand a further £150 to cover his costs in collecting the increase. This, to put it mildly, led to a great deal of bitterness.

Three farmers, Thomas Clewes, John Barnett and George Banks and the local magistrate, Captain Evans, employed Richard Heming to murder the Rev. Parker and, to keep Heming quite (permanently), they also employed a local farrier, James Taylor, to murder Heming and bury his body in the barn, owned by Clewes.

A quirk of 18th Century law was that only someone who actually committed a murder could be tried for it.  Accomplices could also be prosecuted, but only at the same time as the actual murderer. As Heming (who killed the Rev. Parker) had been killed by Taylor, who had died of natural causes during the intervening 24 years, neither of the actual murderers could stand trial.  So the three farmers and the magistrate got off scot free.  This made the case notorious and the large amount of publicity surrounding it and many other events, such as a five year long campaign of civil disobedience in Ireland, prompted the government to put an end to this antiquated source of almost constant rural conflict.

In 1836 parliament passed The Tithe Commutation Act which replaced Tithes with a variable annual cash payment. As the amount payable was to be based on the average national price, over seven years, of wheat, barley and oats the new tax became known as Corn Rent.

Not all land had been subject to Tithes and so it was necessary to undertake a survey across England and Wales (the Act did not yet apply to Scotland and Ireland) to identify the properties on which Corn Rent would be payable.

As Corn Rent was based on the size of landholding, each parish map showed the precise locations of property boundaries and the field system and, as is always the case when taxes are involved, they were produced with unprecedented accuracy and detail.

The Tithe Map of Llandanwg village in Gwynedd 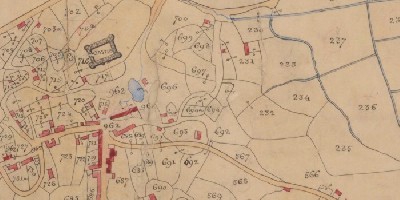 Before the Ordinance Survey started to produce large scale maps at the end of the 19th century Tithe Maps, in rural areas, were usually the only accurate maps available and so were used for many other purposes such as planning the expanding railways, routing the canal system, etc.

Some Tithe maps were certified as being correct (sealed by the Tithe Commissioners) and could be used as a record of property ownership. As such they were often included within the title deeds when land was sold or transferred.

The original Tithe Map and a modern aerial view of Builth Wells.
Note that the main road layout has hardly changed in the past 200 years. 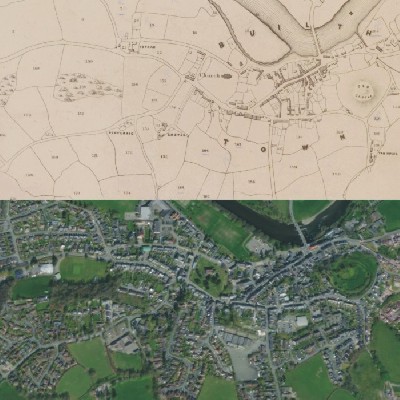