A brief look at the differences between compasses with Degrees and Mils.

Most compasses have one thing in common; they will give us a number which signifies a direction.

If someone else understands the number they will also understand the direction, without us having to point, explain or draw a line on a map.

There are also many different systems for dividing a circle into units.  For example Grads / Gradians which are mostly used by land surveyors. The reason they are useful for surveying, but not navigating, is that in the Grad system each right angle is divided in to 100 units (Centigrads), so a complete circle is 400. As land surveyors tend to use geometric shapes, as opposed to North, South, etc, using Grads makes the maths involved much simpler.

The most common numbers used when navigating with a map and compass are Degrees and Mils.

The reason we divide a circle into 360 units is down to the ancient Greeks, Babylonians and others who used the stars to work out when to plant their crops, make sacrifices to the gods, etc. They knew that certain constellations of stars would be in a slightly different place each night and these constellations would go all the way around the sky each year and return to the same point once a year. As they used a calendar which had 12 months, each with 30 days, a full circle must be 12 X 30.  This is why a circle has 360 units – or degrees: from the old French word degré, meaning a step.

Of course we now know that the Earth orbits around the sun every 365.256 days, so 360 is not too bad, and it’s much simpler to use in school maths lessons.

However, in most cases of land navigation (at sea it’s different), the direction is simply given as a number. For example let’s walk on a bearing of 130 degrees for ten minutes, or from the peak the wall junction is 400m at 140 degrees.

Mils (short for Mil-Radians) are, almost exclusively, used by the Military as they are ideal for shooting targets, directing artillery, etc.

I say almost exclusively as some people still believe they are ideal for walking and navigating with a map and compass – they are not.

An obvious drawback is that most people, when out walking and navigating, use Degrees and not Mils. So if you have taken a bearing in Mils and want to pass this on to someone else you are going to need a calculator to convert from one system to the other.

One of the fundamental differences between Degrees and Mils is that a circle is divided into 360 degrees or 6283.185 mils (normally rounded up to 6,400)

From our (map reading and navigation) view we can’t say that the Mil system must be more accurate as each unit (of a circle) is smaller, as this makes no sense in the real world.

It is simply not possible, using a hand-held compass, to take a bearing with an accuracy of better than 1 or 2 degrees. Then if you add in calculation errors when adjusting for magnetic declination plus the normal, lack of, walking accuracy when following a compass bearing, you can see why all competent navigators use a compass with Degrees rather than Mils.

The vast majority of people using Mils don’t understand what they are and this makes no difference what-so-ever.

As long as you can use Mils (or Degrees for the matter) to navigate competently that’s fine.

In maths Radians and Mils are described as angles.

But from a navigation viewpoint there is a fundamental difference between Degrees and Mils and it is this: On a compass Degrees are angles and Mils are distances.

Both can be used to describe a direction.

Now this may seem like a slightly strange statement as how can you use a distance to define a direction?

To answer this question it’s necessary to remember our school maths lessons.

Firstly let’s start with some basics about circles. 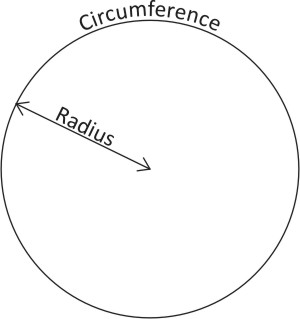 In maths a Radian is the size of an angle that, when drawn from the center of a circle, touches the circumference at two points and the length of the arc between the points is the same as the radius. 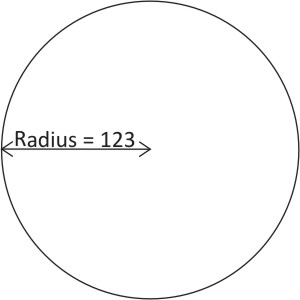 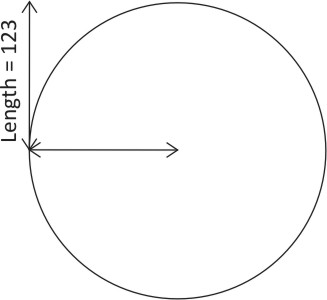 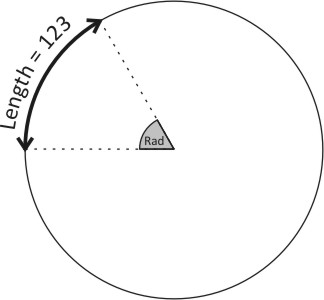 But on a compass a Radian is not an angle, it is the length around part of the Circumference (known as an arc) which is equal to the Radius. 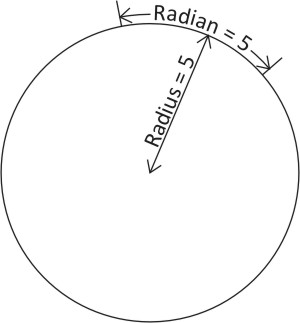 So for example if you have a circle with a Radius of 5 (cm, feet, miles, etc.) the Radian is also 5.

A Radian can be divided in to 1,000 units called a Mil-Radians. 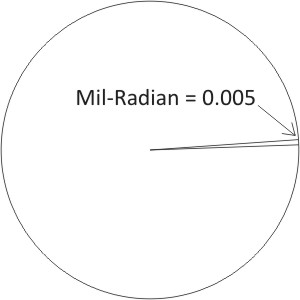 Note that in the graphic the size of a Mil-Radian has been extremely enlarged so you can see it.

Military use of Mils.

Now it may not be apparent from simply looking at the Radius and Circumference of a circle, but THIS is why the military use Mils and not Degrees.

If you know the size of either a circle’s radius or circumference you can calculate the other.

It’s the same with using Mils.

If you know the either the size of something or its distance you can calculate the other.

Using the same principle you can adjust artillery fire which is missing its target and do lots of other “stuff” which the military does.

Civilian use of Mils

It may help to think about in this way: